Daughter of Smoke and Bone by Laini Taylor 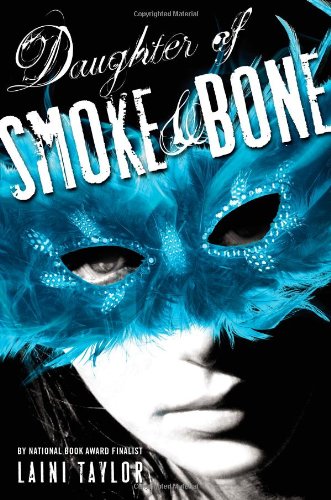 Around the world, black handprints are appearing on doorways, scorched there by winged strangers who have crept through a slit in the sky.

In a dark and dusty shop, a devil's supply of human teeth grown dangerously low.

And in the tangled lanes of Prague, a young art student is about to be caught up in a brutal otherwordly war.

Meet Karou. She fills her sketchbooks with monsters that may or may not be real; she's prone to disappearing on mysterious "errands"; she speaks many languages--not all of them human; and her bright blue hair actually grows out of her head that color. Who is she? That is the question that haunts her, and she's about to find out.

When one of the strangers--beautiful, haunted Akiva--fixes his fire-colored eyes on her in an alley in Marrakesh, the result is blood and starlight, secrets unveiled, and a star-crossed love whose roots drink deep of a violent past. But will Karou live to regret learning the truth about herself? (courtesy of Goodreads)

What makes a truly great fantasy/paranormal novel? Numerous things of course, but I filter it down to two key qualities. First, the reader becomes so invested in the characters that she lives and dies by their successes and failures. Secondly - and most importantly - by the end of the book, the reader has forgotten that the fantasy world is not real.

Daughter of Smoke and Bone definitely fulfills both of these qualities. You become totally immersed in a very foreign world that seems entirely believable and follow Akiva and Karou's every move with anticipation, excitement, and terror.

What makes this book so wonderful can be broken down into a few more subcategories. First, our leading lady Karou and leading man Akiva. Karou is everything you want in a teenage protagonist. Smart, artistically talented, brave, funny, independent, not obsessed with boys, and devoted to her friends and family. Akiva is haunted and angry, yet also resourceful, loyal, romantic, and fundamentally good. Their romance is a key part of the story, but Karou in particular exists without Akiva. While their relationship was a bit insta-love, the intensity fit the situation. The reader gets to know Akiva before Karou does. This sets a mysterious tone, but also downplays the speed of their romance. And what a romance it is. Laini Taylor has a knack for writing scenes between Akiva and Karou that make your heart race and keep you turning back the pages to re-read the romance.

Family and friends are a key part of Daughter of Smoke and Bone. I loved Karou's best friend Zuzanna. Their banter was hilarious and showcased how Karou both could and could not have a normal life. Most important was Karou's family, the chimaera who raised her: Brimstone, her "father," Issa, Yasri, Twiga, and Kishmish. Karou spends much of her life running errands for Brimstone - collection teeth. While Issa fusses over her, Brimstone is reserved with his praise and affection, but you know it's there. Brimstone is a character we slowly learn more about and come to truly admire and respect. In fact, one of the key differences I see between Akiva and Karou is how Karou's confidence and vivaciousness implicitly shows a girl who is well-loved. Even though Karou's family are absent for large portions of the book, their presence is always felt. It's wonderful to have a strong family plotline is a YA novel - a unique one but strong nonetheless.

Laini Taylor's writing is simply marvelous. Despite having rich, detailed descriptions, the book flows smoothly. The action, character development, and romance are spread evenly throughout the book so it never drags. I particularly loved how the world was slowly revealed to the reader. There's a fine balance between mystery and confusion. I hate books that keep me in the dark for three fourths of the story, but I didn't feel that way with this book. I was puzzled but intrigued. And I loved how the things that seemed inconsequential or confusing when I first read it made complete sense when I revisited them after I finished the book. A good book is one that is richer on the re-read than on the first go through.

The world building was just about perfect. The book is made up of seraphim and nephilim. Traditionally, these creatures are known as angels and devilish creatures. But these are not your harp strumming, robe wearing angels. Neither are the chimaera, despite their animal/human appearance, the thoughtless devils that we associate with legend. No. The seraphim and nephilim are locked in an eternal fight. Both sides have created their own mythology about who began the wars and who is at fault. Both creatures are fully described. Or at least as fully described as is necessary for a first book in a series. There was never an info dump, but I finished the book with a clear idea of the introduced creatures, their legends, and the physical world in which they lived. As for the human world, the setting in Prague was lovely. The ornate Eastern European city added to the book's decadence.

I can't recommend Daughter of Smoke and Bone enough. The characters are enchanting, the story rich and emotional, the romance sweet and hot. The book ends leaving you screaming for more.