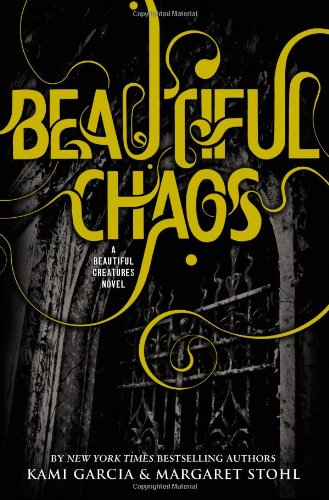 Ethan Wate thought he was getting used to the strange, impossible events happening in Gatlin, his small Southern town. But now that Ethan and Lena have returned home, strange and impossible have taken on new meanings. Swarms of locusts, record-breaking heat, and devastating storms ravage Gatlin as Ethan and Lena struggle to understand the impact of Lena's Claiming. Even Lena's family of powerful Supernaturals is affected - and their abilities begin to dangerously misfire. As time passes, one question becomes clear: What - or who - will need to be sacrificed to save Gatlin?
For Ethan, the chaos is a frightening but welcome distraction. He's being haunted in his dreams again, but this time it isn't by Lena - and whatever is haunting him is following him out of his dreams and into his everyday life. Even worse, Ethan is gradually losing pieces of himself - forgetting names, phone numbers, even memories. He doesn't know why, and most days he's too afraid to ask.

Sometimes there isn't just one answer or one choice. Sometimes there's no going back. And this time there won't be a happy ending. (courtesy of Goodreads)

The Caster Chronicles series stands out among YA paranormal series for being well-written and having excellent, complex world building. The books are not the easiest to read - they're somewhat slow and detailed - but if you allow the books time to soak into you, you'll find that they're one of the most fulfilling series out there today.

Beautiful Chaos is Ethan's book. The first two books in the series center on Lena's choices and Lena's personal demons. These are present in this book as well, but Ethan's own dilemma plays much more of a central role. Ethan continues to discover just what it means to be the Wayward. He displays great courage, compassion, and self-knowledge in this book as he decides what role he is willing to play.

Back together after their separation in Beautiful Darkness, Lena is with Ethan every step of the way, although they're still hiding things from each other. You'd think that two people that can basically read each other's minds wouldn't be able to keep so many secrets. Lena's mother plays an important role here - or her memories do. Lena and Ethan realize that being Light or Dark is not as simple as it seems. I liked the extra dimension added to the Caster world building. The paranormal element is very complex and gets moreso with each book. It's fascinating.

One of my favorite aspects of The Caster Chronicle series is the prominent roles played by the parental figures (ironically not the actually parents): Macon and Amma. Amma is the central figure in this story. She is increasingly haunted and pushing the limits of what she knows to be right to accomplish some goal that Ethan can't figure out. The steadfast, reliable Amma is wavering. I hate to see Amma not behaving as her lovable self, but I think it's a great plot device.

And of course you have Link - the Linkubus. Not only is Link a joy to read about, but he furthers the paranormal element of the series. He reminds me of Simon in The Mortal Instruments, although they're not that much alike. I love that Link doesn't take anything serious, except maybe for Ridley. Even when the world is falling apart, Link manages to make everything seem better. He is a much appreciated ray of light in a very angsty series.

I can't say that Beautiful Chaos is my favorite book in the series. It was slow and harder for me to get emotionally invested in, but I think my love for it will come in time. Both Beautiful Creatures and Beautiful Darkness (BD in particular) were books that I enjoyed on the first go-round, but only came to truly love on a second read. There is so much going on in these books that I need to read them twice to appreciate them.

That said, the ending of Beautiful Chaos was shocking! Well not that shocking since I guessed it would happen, but I definitely closed the book with horror knowing that I would have to wait a whole year to find out what was going to happen. I can't wait that long!