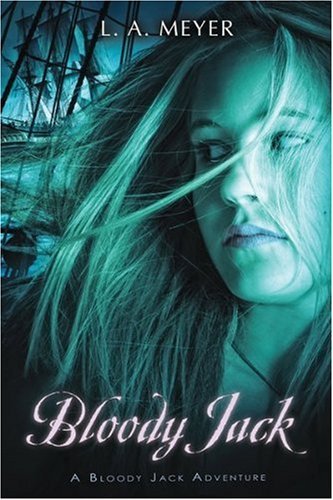 Life as a ship's boy aboard HMS Dolphin is a dream come true for Jacky Faber. Gone are the days of scavenging for food and fighting for survival on the streets of eighteenth-century London. Instead, Jacky is becoming a skilled and respected sailor as the crew pursues pirates on the high seas.
There's only one problem: Jacky is a girl. And she will have to use every bit of her spirit, wit, and courage to keep the crew from discovering her secret. This could be the adventure of her life--if only she doesn't get caught. . . . (courtesy of Goodreads)

Bloody Jack is a rollicking adventure story. Mary Faber was born into a good, working class family in 19th century London. Upon the sudden death of her parents and sister, she was left to the streets. She quickly fell into a street gang of kids who looked out for and fought for each other. A few years later, the leader of her gang was murdered and Mary was once again left without direction. This time, she set out on her own. She cut her hair, put on a pair of trousers, named herself Jack Faber, and found a job as a ship's boy on a navy ship.

Mary aka Jack's life on the ship is one adventure after another. When she and the other shipboys aren't getting themselves into trouble, Mary is dealing with pirates, bullying midshipmen, puberty, and falling in love with one of her "brothers."

I really liked Mary. Despite the hard life she's lived, she has a certain innocence to her. Or maybe it's more a sense of optimism than innocence. She witnesses and experiences horrible things but takes it like a man, so to speak. She never complains and goes overboard with worrying and self-pity; she just keeps going. I also liked that she didn't decide to become a ship's boy to prove that a girl can do it. All she wanted was to create a better life for herself. And even though she disguised herself as a boy, she never lost the image of herself as a girl. I liked how the author portrayed Mary as brave and equally worthy or superior to the boys, but still very much a girl in her thought processes.

The book is told in Mary's cockney accent. This takes some getting used to. At first, I thought it would really drag down the book, but after a chapter or two I barely noticed it. The use of dialect decreases as the book goes on and Mary matures.

If you're at all interested in ships or the sea, you will find this book fascinating. On the other hand, if boats bore you to tears, don't worry. The book goes into a lot of detail about the workings of a 19th century ship, but never to the point that the plot suffers. The information fits seamlessly into the shipboys' adventures.

Bloody Jack was a fun, adventure-filled book. It's not one of those books that feels like it could have actually happened. There are just too many coincidences, calamities, and miracles to be at all realistic. At times, I had to roll my eyes as Mary was yet again thrown off the proverbial cliff and landed gently on her feet. It's like watching an action movie - you go for the special effects and martial arts, not for Oscar quality dialogue or emotional conflicts. Bloody Jack is a little silly, but it sure is a fun ride.