This is one of my reviews for the Banned Book Challenge. Go to the main post on StephSuReads' site here and my post discussing the challenge here. 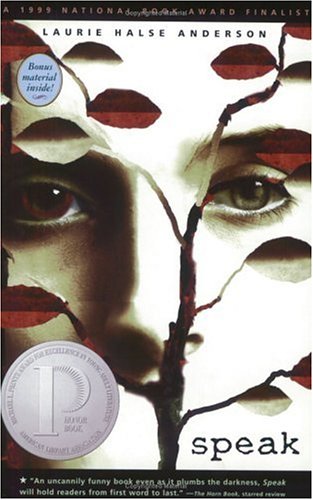 Since the beginning of the school year, high school freshman Melinda has found that it's been getting harder and harder for her to speak out loud: "My throat is always sore, my lips raw.... Every time I try to talk to my parents or a teacher, I sputter or freeze.... It's like I have some kind of spastic laryngitis." What could have caused Melinda to suddenly fall mute? Could it be due to the fact that no one at school is speaking to her because she called the cops and got everyone busted at the seniors' big end-of-summer party? Or maybe it's because her parents' only form of communication is Post-It notes written on their way out the door to their nine-to-whenever jobs. While Melinda is bothered by these things, deep down she knows the real reason why she's been struck mute...

Laurie Halse Anderson's first novel is a stunning and sympathetic tribute to the teenage outcast. The triumphant ending, in which Melinda finds her voice, is cause for cheering (while many readers might also shed a tear or two). After reading Speak, it will be hard for any teen to look at the class scapegoat again without a measure of compassion and understanding for that person--who may be screaming beneath the silence. (courtesy of Goodreads)

Speak is a difficult book to read. It is painful and haunting. Not a book to read on a day you need cheering up or on your birthday (as I learned the hard way). It is one of those books that sticks with you long after you've finished. I struggled to read Speak at the beginning, simply because it is so dark, but pretty soon I was caught up in Melinda's sad world. I ended up glued to my chair for hours at Starbucks until I finished the book.

Melinda is just starting ninth grade. After calling the cops at an end-of-summer party, she is hated by everyone, including her former best friend. The only girl who pays attention to her is Heather, a new girl who is more interested in being popular than in truly gaining Melinda's friendship. Her parents are so caught up in their own troubles, that they don't even notice their daughter struggling.

It is clear that Melinda is in a deep depression. It's like there's a sheer black veil covering her eyes - she can see and function, but everything is dark and blurry. She goes through life seeing the bad in everything, unable to enjoy even pleasant experiences. At first, we don't know why. But as the story progresses, we learn that Melinda was raped at the summer party. She has told no one, but it is always at the forefront of her mind.

The reader really gets into Melinda's head. The book is designed to make you feel as she does. Even the sentence structure, which is short and choppy, makes the book seem dark and harsh. You get hints of the fun girl Melinda once was before the party. I love her sarcastic complaints about the banalities of high school life. It broke my heart to see Melinda trying to enjoy life, but not being able to get through - you could see that she loves art, she wants to have friends, she wants to do well in school, but the depression controls her.

Speak is a frequently challenged and banned book. I can understand a parent's fear of having their child exposed to painful subjects such as rape and depression. But these topics are unfortunately all too real for many teens. Speak is a book that these teens can relate to and is also an excellent teaching tool for all teens. In the afterward to the 10th edition, Laurie Halse Anderson notes, "I have gotten one question repeatedly from young men. These are guys who liked the book, but they are honestly confused. They ask me why Melinda was so upset about being raped...I realized that many young men are not being taught the impact that sexual assault has on a young woman." Speak opens a door to discussion and knowledge that no dry lecture from a teacher can.