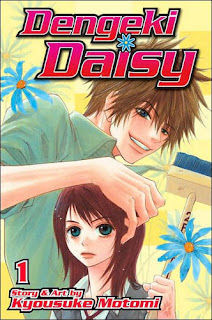 
Warning: My manga "reviews" often contain spoilers. I find it hard to adequately discuss a volume of manga without talking about it in more detail than some might like.

Dengeki Daisy begins when Teru Kurebayashi's older brother dies. Just before he passes away, he gives her a cell phone that connects her to Daisy. Daisy will always be there to comfort and protect Teru. And she is in much need of comfort and protection throughout Volume 1. When she breaks a school window and can't pay for it, she is sentenced to indefinite servitude under Tasuku Kurosaki, the school janitor. Kurosaki is lazy, rude, and prickly. Teru is miserable. It's clear pretty quickly to everyone but Teru that Kurosaki is Daisy. Through her cell phone, he provides moral support and comes to her support whenever she's in danger.

On the surface, Teru is a meek, shy girl. But a lot of spunk lies beneath. Teru is inclined to make dramatic pronouncements while holding her fingers in a sideways V-shaped salute. It's a bit silly, but very "manga-ish." She is also kind and brave, willing to go out of her way to protect people who don't even like her. She does manage to get herself in situations where she needs to be rescued. Lucky Daisy/Kurosaki is always there to save the day. While there are legitimate reasons to dislike the weak girl, strong boy stereotype, it does make for a good story. I love the tension between Teru and Kurosaki. There are some gorgeous drawings where you can just feel the attraction between them. It's impressively romantic.

Volume 1 is a good intro into Dengeki Daisy. It's a little confusing, and it took me awhile to feel any connection to the characters, but by the end, I was looking forward to Volume 2. It's a silly shojo manga - pure romance fluff, but there's it's nice to read that every once in awhile.
Posted by Alison Can Read at 6:55 PM