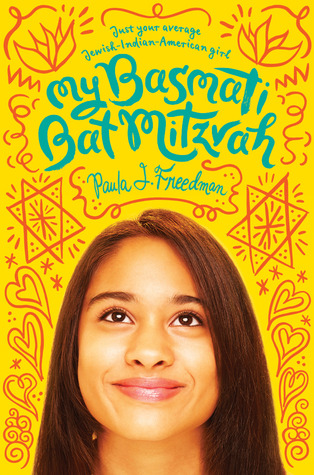 During the fall leading up to her bat mitzvah, Tara (Hindi for "star") Feinstein has a lot more than her Torah portion on her mind. Between Hebrew school and study sessions with the rabbi, there doesn’t seem to be enough time to hang out with her best friend Ben-o--who might also be her boyfriend--and her other best friend, Rebecca, who’s getting a little too cozy with that snotty Sheila Rosenberg. Not to mention working on her robotics project with the class clown Ryan Berger, or figuring out what to do with a priceless heirloom sari that she accidentally ruined. Amid all this drama, Tara considers how to balance her Indian and Jewish identities and what it means to have a bat mitzvah while questioning her faith. (courtesy of Goodreads)

My Basmati Bat Mitzvah is a fun middle grade read. It manages to have a lot of substance whilst feeling like there wasn't much substance - which is a strange accomplishment and it is both a compliment and a criticism of the book.

Tara is involved in a lot of worlds. She's of Indian descent and she is Jewish. She is questioning her faith and she (sort of) wants a bat mitzvah. She loves her parents and is frustrated by them. She loves her best friends and hates her enemies until she doesn't. She is a contradiction. She is growing up.

At times, there are so many issues running through this book that it gets a bit crowded. At other times, it feels pretty flimsy. Problems arise for seemingly no reason at all. Problems resolve a little too easy. I think most of this is the function of it being more of a middle grade novel than a YA novel. Tara is a young 12/13 year old. Her immaturity is frustrating to someone accustomed to reading about older characters. I just wanted to shake her when she did some really stupid things.

Despite some reservations about this book, I did enjoy it. Tara is a nice kid, if a bit immature. I really like getting the feel for Indian culture and some basic information about the bat mitzvah process. It also handled complex issues like race, faith, and growing up in sensitive and thoughtful ways.

Recommendation: Grab it from the library.

Powell's Books (Support an Indie Bookstore!)
Posted by Alison Can Read at 12:08 AM