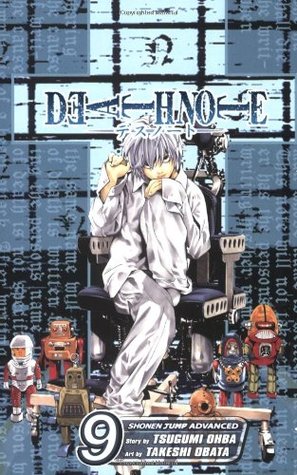 Light has always been confident in his ability to outthink everyone, but L's proteges are proving to be more of a challenge than he anticipated. The more Light mentally maneuvers, the tighter the net around him becomes. And now Near and Mello are working to break the taskforce apart and expose Kira from within! Light has always held up under pressure in the past, but will the stress of this new line of attack and the strain of maintaining three different personalities be the beginning of his end? (courtesy of Goodreads)


This volume was kind of frustrating. I felt like it tried to do too much and lost itself along the way. There wasn't enough to really capture my attention so I spent much of the volume skimming. Arguably, I may have enjoyed the volume more if I'd read more carefully, but the volume should have been plotted better to hold my attention.

I'm disliking Light more and more. He hasn't changed per se. I always knew that he was an arrogant megalomaniac. What I've respected most about him is his intelligence and his cunning. He still has that, but as Near and Mello get closer to him, Light is struggling. He still manages to stay a step ahead, but he's getting desperate. And that's the problem. Smart is sexy. Desperation is not.

I was sad to see a particular character die in this volume. But Light's reaction shows just how inhuman he's become. He was sad, to be sure, but it seemed that his main regret was that the person died without telling Light who Mello was.

I really like Near. He's basically a childlike L. The scenes where Near is postulating his theories on who Kira is (which are correct) even take place while Near is playing with toy policemen and a train set. Mello is basically the evil version of Near. He also wants to get Kira but does so by creating as much chaos and disaster as possible whereas Near is quiet and calculating.

I still miss L. I'm hoping he does a magical resurrection in the last volume, but I doubt it. I think L's absence explains a lot about my fatigue with the series. Only 3 more volumes.