Better Off Friends by Elizabeth Eulberg 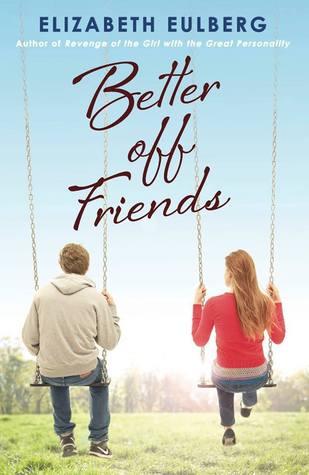 Better Off Friends by Elizabeth Eulberg

For Macallan and Levi, it was friends at first sight. Everyone says guys and girls can’t be just friends, but these two are. They hang out after school, share tons of inside jokes, their families are super close, and Levi even starts dating one of Macallan’s friends. They are platonic and happy that way.

Eventually they realize they’re best friends — which wouldn’t be so bad if they didn’t keep getting in each other’s way. Guys won’t ask Macallan out because they think she’s with Levi, and Levi spends too much time joking around with Macallan, and maybe not enough time with his date. They can’t help but wonder . . . are they more than friends or are they better off without making it even more complicated?

From romantic comedy superstar Elizabeth Eulberg comes a fresh, fun examination of a question for the ages: Can guys and girls ever really be just friends? Or are they always one fight away from not speaking again — and one kiss away from true love?(courtesy of Goodreads)

Elizabeth Eulberg is one of my favorite YA contemporary romance authors. Better Off Friends is the kind of book that I've come to expect from Eulberg. Sweet, light, fluffy, engaging characters with a happy ending.

Our leading man and lady, Levi and Macallan are both nice kids, the kind of characters you root for. Levi is the friendly, outgoing, athletic type. He is the type that wants to fit in and can be a bit too swayed by peer pressure of fitting in with "the guys." Macallan holds things closer to her chest. Her mother's death when she was 11 forced her to grow up fast. But she's not a withering flower. She speaks her mind and even the toughest guys don't scare her off. When Levi and Macallan are together, there is endless banter. Good-spirited teasing, inside jokes, television quotes. It's hard to be in their presence because you quickly feel like a third wheel.

The ultimate question of this novel is whether boys and girls can be "just friends." The answer the book presents is essentially "Ehhhh...not really." At least not easily. Macallan and Levi maintain a pure friendship for years. Dating other people, having separate friends while being as close as siblings. Then things get more complicated. One develops feelings that the other doesn't share. Awkwardness, jealousy - about what you'd expect. It ends up feeling pretty predictable. I don't necessarily mind that, although I do enjoy being surprised. With this kind of book, I usually want the story to take the happy, predictable path I expect.

The pacing of the novel falls at times. It takes place over the course of about four years. I enjoyed getting to see Macallan and Levi grow up, but this long time period makes the plot occasionally drag. It's told between the alternating points of view of Levi and Macallan, which I really liked. There are also little asides by the two of them which makes it seem like they are recounting the story to us. So we know going in that they remain at least friends at the end (not that you'd expect otherwise). Each time the point of view changes, there is a little swing with either a girl or a boy on it to indicate who will be telling the story. I thought that was a really cute and clear way to distinguish the characters.

Better Off Friends is a fun, lighthearted romance. It's not my favorite Elizabeth Eulberg book (that would be Prom & Prejudice), but it's well worth picking up. Anyone who enjoys likeable characters, romantic tension, good banter, and general fluff will love this book.