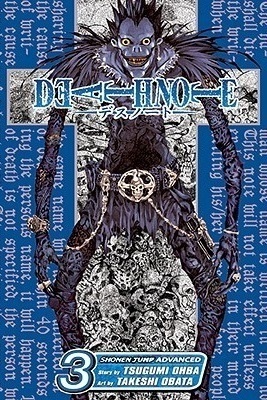 Hard Run Light is chafing under L's extreme surveillance, but even 64 microphones and cameras hidden in his room aren't enough to stop Light. He steps up the game, but before the battle of wits can really begin, a family emergency distracts him. But even though Light isn't using the Death Note right now, someone else is! Who's the new "Kira" in town? (courtesy of Goodreads)

It's been such a long time since I've read Death Note. Luckily, volume 3 was easy to follow and the plot elements came back to me quickly.


The thing I love most about Death Note is that the lines between good and evil are blurred. Actually, that's not quite true. Light's love for playing god is subtly but also strongly implied to be wrong. Where the lines get blurred is with who you root for. I dislike Light. He's arrogant and he enjoys killing people (even if they are mostly bad people). And yet I'm rooting for him to continue getting away with murder.

L, the genius investigator, is a more prominent character in Volume 3. He's being set up as Light's equal and a hero. He reminds me a lot of the BBC version of Sherlock. Brilliant and socially awkward; someone who may be on the side of the angels but isn't one of them. I'm curious to see what I'll think about him in further volumes.

Volume 3 has cemented my love for this series. It's not just about whether Light can kill people with the Death Notes. It's a chess game between two geniuses. And I can't decide who I want to win.