Manga Mondays #175: The Girl Who Loved Doctor Who by Paul Cornell

The Girl Who Loved Doctor Who by Paul Cornell 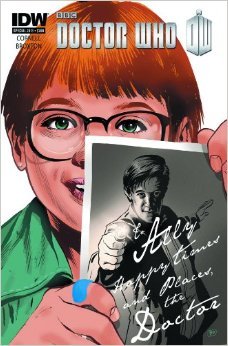 In this special one-shot story celebrating the 50th anniversary of Doctor Who, a strange force flings the TARDIS and the Doctor into our own universe! Once here, the Doctor encounters a 10-year-old girl who happens to be a huge fan of the Doctor Who TV show. The Doctor grapples with being a fictional character and monsters lurking at the girl's school on the way to coming face-to-face with the actor who portrays him, Matt Smith! (courtesy of Goodreads)

The comic was written by Paul Cornell, who wrote my two favorite Doctor Who episodes Human Nature and Family of Blood, so I had high hopes for his comic. Like the episodes he wrote, it does a good job of focusing on the characters' emotions. How the Doctor feels to have a TV show chronicling his life (as you'd expect, bemused and surprised). How Matt Smith feels that the Doctor is real (very surprised and pretty cool). How the little girl feels to encounter the real Doctor (skeptical but then a big cheerleader).

The main subplot of this story focuses on bullying. Like many (most) Doctor Who fans, the little girl/mega Who fan is not particularly cool with her peers and she has to deal with some really mean kids. The Doctor helps her be more confident in herself and handle the bullies. The morality part of the comic was a bit heavy-handed for my taste, but the comic is clearly aimed at a younger reader so I tolerated it better than I would otherwise.

I still prefer manga style art over western style since that's what I'm used to. But the comic was easy to follow. The art was good, not spectacular. It never got in the way of the plot. It was also very short - 44 pages. I'd really prefer a longer story, but if you're aiming for 10-12 year olds, perhaps that's a good length.

If you're looking for a mature and complicated comic strip, The Girl Who Loved Doctor Who will not be your cup of tea. On the other hand, if you want sweet and innocent fun celebrating Doctor Who and all those who love it, Paul Cornell's comic is a fabulous tale.