I just returned from a 3 week trip to Europe. It was fabulous! We started off in Munich, then went to Milan then Rome. After a few days in Rome, we took a week long cruise that stopped in Genoa, Cannes/Monaco, Barcelona, Mallorca, and Valencia. We were in Rome for a few more days after the cruise ended and finally spent a couple of days in Barcelona.

Here are a few outtakes from the trip:

As wonderful as seeing Germany is, the real reason I wanted to go to Munich was to visit Danny of Bewitched Bookworms. Danny and I (and our husbands) spent the weekend together. They were such great hosts!

We loved Munich. It was so interesting and also felt really livable. It was our favorite place that we visited in Europe.

We saw all the highlights of Munich, including the city center cuckoo clock tower, lots of churches, the Hofbrahaus, the Viktualienmarket, the spot where Octoberfest is held, Nymphemburg Palace, and much more. On Sunday, we drove out to Chiemsee, a beautiful lake with one of King Ludwig II's palaces. 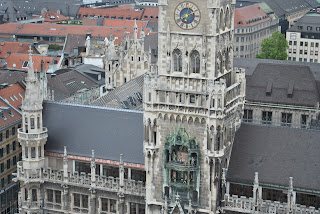 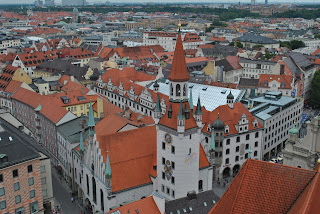 Our next several days were spent in Milan, where my husband attended a conference. There's not a huge amount to do in Milan other than shopping. I enjoyed walking around the main shopping areas and loved looking at the Duomo - the big Cathedral. 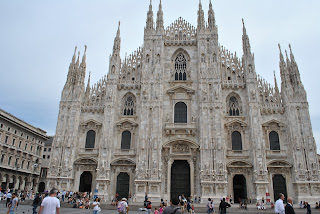 We took the train to Rome on Thursday. We had a day and a half before our cruise and then another two and a half days in Rome after our cruise. We filled our time with lots of site-seeing and great food. We saw the Colosseum, the Vatican, the Trevi Fountain, and much more.

Our first cruise stop was a little underwhelming. Actually, I think Genoa would be a very cool place, but not on Sunday, when everything is closed. Still, we got to see some nice Cathedrals and Christopher Columbus's house.

We did a cruise excursion to Monaco when we were docked in Cannes. Unfortunately, it was raining torrentially so we didn't get to see as much. I wish we'd docked in Nice, so we would have had time to look around there.

The Spanish island is a popular vacation spot. There's not that much to see in the town, but just enough. I wish we'd had time to go to the beach too.

The third largest city in Spain isn't exactly a tourist mecca. We did see a nice cathedral, a great market, and a really cool silk market. But what I'll remember of Valencia is our lunch. We went to Carosel and got a 3 course meal for about the equivalent of $20 each. The best part was the paella, a dish that originated in Valencia.

The last few days of our trip were in Barcelona. It was quite an adventure getting there. We took the train from Rome to the airport. When the train stopped at the airport, I fell back and hit my tailbone really hard on the armrest. The shock of the pain from that caused me to faint! I got to ride in an authentic Italian ambulance. It was very exciting, other than the extreme tailbone pain and nausea. Luckily, I was fine and we actually still made our plane.

We loved Barcelona. It was a close second or maybe a tie with Munich for our favorite place. There's so much to see. We loved La Sagrada Familia (Gaudi's unfinished cathedral), all the Gaudi architecture, the Barri Gotic and more. The food was great too.

We had such a good time in Europe. Three weeks was a little bit long for my taste, but I can't wait to get back to the continent again!

Have you been to Europe? Or do you live in Europe? What's your favorite place to visit?
Posted by Alison Can Read at 12:00 AM