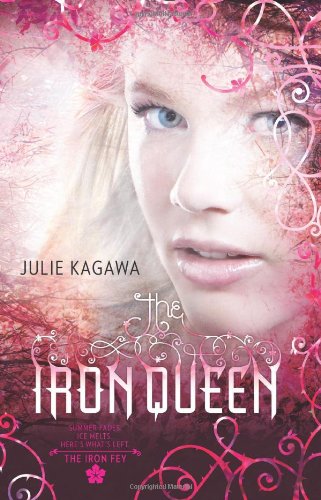 My name is Meghan Chase.

I thought it was over. That my time with the fey, the impossible choices I had to make, the sacrifices of those I loved, was behind me. But a storm is approaching, an army of Iron fey that will drag me back, kicking and screaming. Drag me away from the banished prince who's sworn to stand by my side. Drag me into the core of conflict so powerful, I'm not sure anyone can survive it.

This time, there will be no turning back. (courtesy of Goodreads)


*This review has spoilers for Iron King and Iron Daughter. Also, I do summarize a few plot points from Iron Queen that may be spoilery, although I tried not to reveal anything crucial to the plot.

Meghan Chase has come a long way in three books. My main complaint about her in the first book, Iron King, was that she started out so boring, so passive. But she steadily improved throughout the first two books. Now, she is a woman, no longer a girl. Instead of looking to Ash and Puck for help, it is Meghan who tells the boys what to do. She is a strong, kick-butt protagonist.

Iron Queen is loaded with action. Not even twenty pages into the book, there is a big fight scene. And the battles continue throughout the book. There are new enemies and new allies. I like how Kagawa consistently creates allies for Meghan out of people who should be her enemies. We saw that with Ironhorse in Iron Daughter and we see it once again in Iron Queen.

The romance is great as well. I've always been Team Ash, so I'm thrilled to see so many great Ash moments. He is every more devoted to Meghan and more human, more open - less icey. I like that Puck has largely accepted the fact that Meghan and Ash are going to be together. Instead of him posturing to win Meghan's heart, we see him acting as his normal snarky self and fighting to save his friends (I say plural because Ash is his friend too, even if he won't admit it).

The only part of this book I didn't like is the time they spend at Leaninsidhe's cabin with Paul, Meghan's erstwhile father, trying to help him regain his memories. I understand that this is important to Meghan's history of missing her father and also used as a time for Meghan, Ash, and Puck to prepare for the big fight in the NeverNever. However, I thought it dragged the middle of the book down significantly. I was happy when they moved on.

I really enjoyed the ending. It had that nice combination of summing up the trilogy while leaving room for more. I've read a few people didn't like the ending. I think I understand why, but I thought it was really interesting. Satisfying, yet not saccharine sweet.

Iron Queen is a must read for any Iron Fey fan. For those who have not yet read the series, I highly recommend it. It only gets better with each book.