What Books? The Movie Is Better Than The Book

What Books? The Movie Is Better Than The Book

I have a new feature called "What Books?" I have so many book memories from my childhood. Different books touched me in different ways and had came to me at important times. I plan on running this feature every other week and featuring books that I love(d) for different reasons.

Right now, a lot of the topics and books that come to mind feature books that I liked when I was in elementary and middle school more than books I liked in high school and later. So there is more of a middle-grade focus.

See prior editions of What Books? here:

Please feel free to contribute your own favorite books in the comments or post similarly on your blog and link to this. If people like this feature as it gets going, I think it might be a fun meme.

What movie did you think was better than the book? Everyone always says that the book is better than the movie. This is usually for good reason. For example, consider The Golden Compass or Cheaper By The Dozen (Steve Martin version). Both were substantially changed, in what I think were bad ways, from the book. Even movies that I enjoy, like the Twilight and Harry Potter films, pale in comparison to their book versions. The flaws in a book-adaptation movie are largely understandable. You can't bring all the lovely details from a book into a film without making it five hours long and five hundred million dollars. Also, a reader has an image in her head of what the actors look like, speak like, and act like. It's inevitable that at least one of the characters in a movie version won't fit the version in the reader's mind. 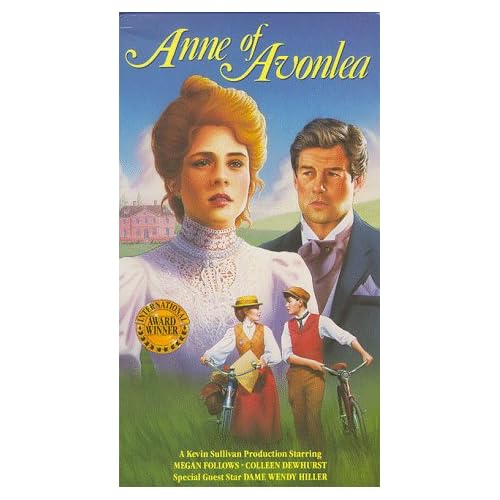 Kevin Sullivan is a genius. He's turned several beloved L.M. Montgomery books into movies or TV shows, including: The Story Girl and The Golden Road (Avonlea TV show) and Jane of Lantern Hill. He is best known for his adaptations of Anne Of Green Gables, Anne Of Avonlea, and Anne: The Continuing Story. Anne Of Green Gables is a fabulous movie with a loyal adaptation and perfect actors (especially handsome Gilbert Blythe). Anne: The Continuing Story was interesting, but not nearly as good as the prior two. Too much time had passed and the script varied too much from the plot.

Annd Of Avonlea the movie actually combines Anne Of Avonlea, Anne Of The Island, and Anne Of Windy Poplars. Characters are both added and omitted. Major plot points, such as Anne's teaching, are changed drastically from the book. There are so many reasons this should be awful, but I loved it. I love seeing Anne teach at Kingsport. I love the character Emmeline Harris, and her prominence to the story. The unlikely friendships with Katherine Brooke and Pauline Harris are also fascinating. I love the development of Anne's relationship with Gilbert and the addition of the dark and handsome Morgan Harris.

Despite my love for the movie in general, I think the real reason that I preferred the movie version of Anne Of Avonlea over Anne Of Avonlea, Anne Of The Island, and Anne Of Windy Poplars is that I saw it first. I didn't read the books until I was in college. By that point, I'd seen the movie multiple times, and it shaped my opinion of the books. It's amazing how influential the order of viewing/reading can be.

A few other movies that I liked as much or better than the book (also because I saw them when I hadn't read, or hadn't read for a long time, the books):

What movies have you liked better than the book? Why do you think you preferred the movie?
Posted by Alison Can Read at 7:35 AM