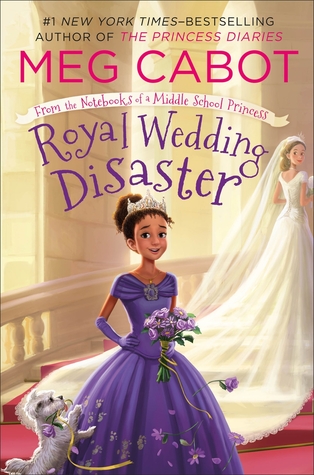 You are invited to a Genovian Royal Wedding in this second book pulled FROM THE NOTEBOOKS OF A MIDDLE SCHOOL PRINCESS, a Princess Diaries spin-off series, written and illustrated by New York Times-bestselling author Meg Cabot.

Olivia Grace Clarisse Mignonette Harrison still finds it hard to believe that she's a real live PRINCESS OF GENOVIA. Not only does she get to live in an actual palace with her newly discovered family and two fabulous poodles (who all love her and think that she's anything but ordinary!) but she also gets her very own PONY!

Of course, things aren't going exactly like she imagined. Her half-sister Mia is very busy learning how to take over the country while trying to plan a wedding and her father is actually getting remarried himself-to Mia's mother!-and spends most of his time "renovating" the summer palace, although Grandmere says he is just hiding from the wedding preparations. Olivia hardly gets to see either of them.

Fortunately, Grandmere has her own plans for Mia's wedding, and needs Olivia's help to pull them off. Just when Olivia starts to think that things are going to work out after all, the palace is invaded by a host of new cousins and other royals who all seem to be angry at Olivia (although Grandmere says they are just jealous).

As the day of the wedding gets closer and closer, Olivia becomes more and more worried. For such a carefully planned event, it seems like a LOT of things are going wrong... Can Olivia keep this royal wedding from becoming a royal disaster? (courtesy of Goodreads)

I like Olivia more than Mia. Mia was known for her neuroticism, as well as her passion for the environment and other causes. At times she made me nervous to read her, because she was so quirkily anxiety prone. Olivia has a natural confidence and maturity that makes her fun to be around. I think it's because she had to essentially raise herself. Her confidence never comes off of arrogance. She's the type of girl that most people would like, but won't be in the popular group.

The plot is your standard middle grade plot. Mean girls, school drama, crazy royal family antics. It's basically the same plot as the first book, but in a different setting. I don't necessarily mind that. I'm reading the book, because I like the Princess Diaries world and I also like Olivia's personality.

Meg Cabot runs hot and cold with me. And I can see both aspects in this book. It's inherently pleasing and easy to read. But it also feels a bit cliched. At times, Olivia comes off as too old for a girl of her age and other times as much too naive for a girl of her age. The book relies too much on tropes. That said, I'm reading this because it's fun and not because I have high expectations. So just put those things aside and have a good time!

Recommendation: Borrow for all fans of the Princess Diaries. Lots of fan service.