Blog Tour and GIVEAWAY: The Goddess Inheritance by Aimée Carter

Love or life.
Henry or their child.
The end of her family or the end of the world.
Kate must choose.

During nine months of captivity, Kate Winters has survived a jealous goddess, a vengeful Titan and a pregnancy she never asked for. Now the Queen of the Gods wants her unborn child, and Kate can’t stop her–until Cronus offers a deal.In exchange for her loyalty and devotion, the King of the Titans will spare humanity and let Kate keep her child. Yet even if Kate agrees, he’ll destroy Henry, her mother and the rest of the council. And if she refuses, Cronus will tear the world apart until every last god and mortal is dead.With the fate of everyone she loves resting on her shoulders, Kate must do the impossible: find a way to defeat the most powerful being in existence, even if it costs her everything.

Even if it costs her eternity. (courtesy of Goodreads)


I'm honored to be a part of the Blog Tour for The Goddess Inheritance, the final book in The Goddess Test series.

Kate and Henry are the heroine and hero of this series. Kate is the human who goes to live with the gods. She is a study in contradicting. Extremely giving and self-sacrificing, but also impulsive, temperamental, and hard-headed. Henry is hard to love at first. He guards his heart so carefully that he seems like an emotionless shell. But really he is kind, sensitive, honorable, thoughtful, and haunted by lost love. Not only are the main characters of this series fully fleshed out, but you have a whole host of strong side characters. I can't really say too much about them without giving away the main surprise of the first book, The Goddess Test, but I promise that they are all flawed characters with independent lives that we learn more about as the series goes on.

If you really want to get a feel for the characters and the mythology, I'd actually suggest starting with The Goddess Legacy, a collection of novellas, which tells the story of the gods and goddesses who form the backbone of the series. We learn how Henry became Hades and see the origin of his pain.  We see how the "adults" in this series are really the devious, flawed gods and goddesses of traditional Greek mythology that everyone loves to hate. The Goddess Legacy (it's technically Book 2.5) gives away some of the major surprises of The Goddess Test, but it made the whole series so much richer. I loved how Ms. Carter enriched the somewhat boring myths that I read in school and made them come to life! 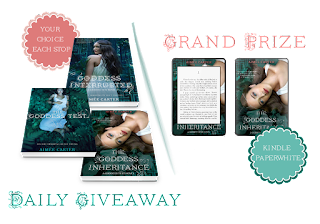 Enter for the chance to win a copy of any one book in The Goddess Test series. Even better, all entries into the daily give-away count towards the grand prize give-away of a Kindle Paperwhite skinned in the gorgeous and lush The Goddess Inheritance cover art!

a Rafflecopter giveaway
Check out all the stops in the The Goddess Inheritance Tour!