As nice as it is getting gobs and gobs of books at BEA (and let's face it, that's pretty damn nice), the highlight of BEA was getting to meet so many bloggers and authors.


I think the bloggers were the biggest highlight of all. I'd never meet these people before, but as soon as I met them, they felt like friends I'd had forever. I met so many incredible people. Unfortunately, don't have photos of all of them. But here are a few: 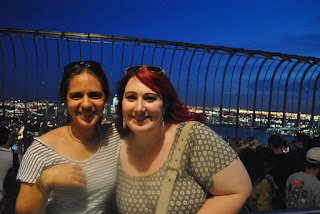 Sara from Novel Novice - One of my roomies. We went to The Empire State Building Friday night (travel tip - I highly recommend shelling out the extra money for express tickets. Rather than waiting in line for 90 minutes, we walked right up to the elevators and got up to the 86th floor in no time). 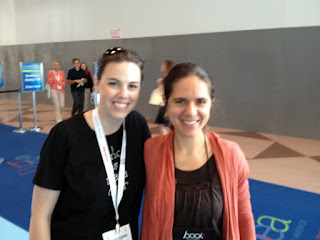 Me and Jenny from Supernatural Snark. So fabulous finally meeting Jenny!!!

Heather, Pushy, Danny from Bewitched Bookworms and me. They were smart enough to artfully pose for the camera, unlike me.

Danny and me. We met at a Starbucks by Rockefeller Center on Friday afternoon and ended up chatting for two and a half hours. So sad that she lives all the way in Germany. :-( Move to America Danny!

Kristi from The Story Siren. So great to meet one of the people that inspired me to blog. Super nice and pretty.

Other bloggers they I really enjoyed hanging out with include (but are definitely not limited to)...My other roomies: Stacy of Pageturners, Megan of Amethyst Daydreams, and Kendra of Books Complete Me (and Sara again, of course).  Melissa of I Swim for Oceans. Briana of The Book Pixie. Emily of Emily's Reading Room. Susan, Jessica, and Wes of Wastepaper Prose. Kat and Jess of Books and Sensibility. Also, Mary of Book Swarm was my buddy touring Soho Monday night and at the Teen Author Carnival Tuesday night - I'm so sad that I didn't get a photo with her!

Another highlight of BEA is meeting authors at all the signings. And even just seeing authors wondering around.

On Wednesday afternoon, I was walking by the Disney booth and I saw Julie Kagawa standing there talking to a few people. I got to say hi and get a photo. So cool!

Jenny Lawson of The Bloggess and me

Me and Maureen Johnson. Even better than getting a photo...Maureen said she's working on a third Suite Scarlett book!!! 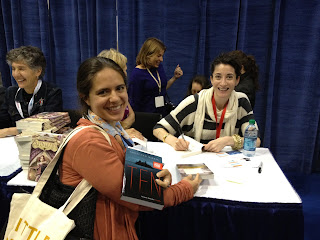 Me and Lauren Oliver!!!! Ignore the fact that I'm holding up Gretchen McNeil's book (fail!) 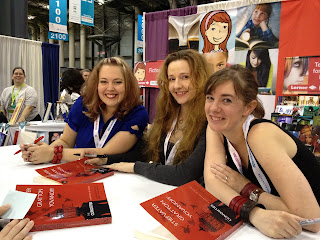 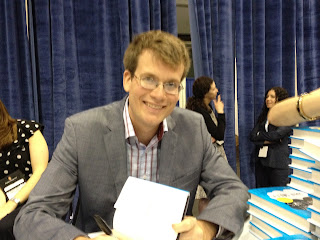 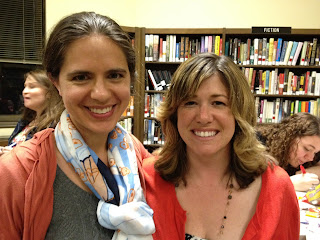 Me and Jen Calonita at the Teen Author Carnival. I fan-girls and told her how I've read all of her books and loved them. I randomly picked up the first Secrets of My Hollywood Life book up on a cruise ship library and then had to get all the other books as soon as I got home. Jen was so nice and friendly.

I met lots of other authors, but didn't get photos. We were staying in the same hotel as Spencer Hill Press. So every morning, I had a free hotel buffet breakfast with Emily White, Jennifer Armentrout, Daniel Cohen, and Kate Kaynak. Also, Dan Wells of Partials. Marie Lu of Legend even joined us one morning. So cool!

I also met Jenny Han and Tricia Rayburn at the Teen Author Carnival. And maybe the coolest meet-up: Sonia Manzano, better known as Maria on Sesame Street!! She has new book coming out called The Revolution of Evelyn Serrano. The four year old me would have died and gone to heaven if she ever realized that she would one day be sitting in a chair next to Maria (although as the time Big Bird would have been a much bigger draw). 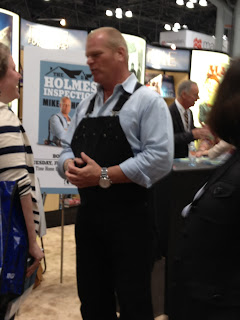 Sabrina Soto of HGTV standing with some random person.

Kirstie Alley
Posted by Alison Can Read at 12:06 AM