I'm participating in The Story Siren's In My Mailbox and Tynga's Reviews' Stacking the Shelves today. Thanks for hosting Kristi and Tynga!

On the Blog This Week

Shatter Me by Tahereh Mafi

Fall From Grace by Charles Benoit: When I’m Not Writing

Books I Read This Week
-Ironically, I have not read any BEA books this week. I had several books I needed to catch up on first.

Lies Beneath by Anne Greenwood Brown
-Thanks to Netgalley!


This is the first of several BEA Recaps that I plan on doing.

After the show closed on Thursday, I made an epic 2 hour journey with Kendra of Books Complete Me and Megan of Amethyst Daydreams to the gigantic post office by Penn Station.

I mailed most of my books off in a gigantic cardboard box previously used for toilet paper, which had been kindly donated to me by the drug store down the road.

I carried on about 14 books for the plane ride home – the ones I thought I’d die if I lost. As I suspected, this turned out to be a very smart idea.

When my books arrived on Friday, the box looked like this: 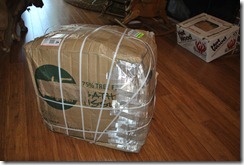 The twine and tape were added by the post office, not me. The box fell apart at some point during shipping and the post office packed it back together.

Unfortunately, several books were severely battered, with bent pages and covers. I’m stacking them under heavy books so they should reshape. Also, four to five books were lost in the process, which has been really disappointing. I’ve identified four so far: Black City by Elizabeth Richards, my second copy of Raven Boys (I had permission to take two), Venom by Fiona Paul, and a finished copy of The False Prince by Jennifer Nielson.

I know, I know. You’re thinking “Poor you – you came home with 71 books and you’re complaining that you lost a few, some of which you can’t even remember the titles?” First world problems here. But still, I hate the idea of losing any books. Especially my copy of The False Prince (I bought one to make up for it). It’s definitely good that I carried on so many books.

Here are photos of the books that did arrive safely home.

*****I’m marking stars by the books I’m most excited about. 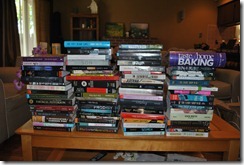 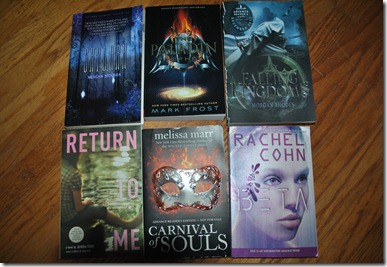 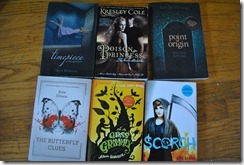 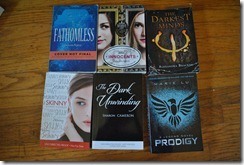 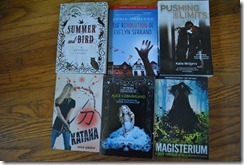 Summer and Bird by Katherine Catmull
The Revolution of Evelyn Serrano by Sonia Manzano (better known as Maria of Sesame Street!)
Pushing The Limits by Katie McGarry****
Katana by Cole Gibson
Alice in Zombieland by Gena Showalter
Magisterium by Jeff Hirsch 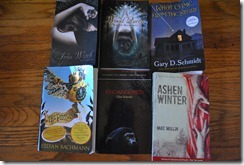 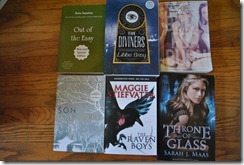 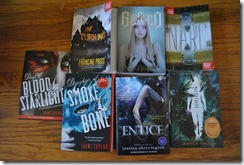 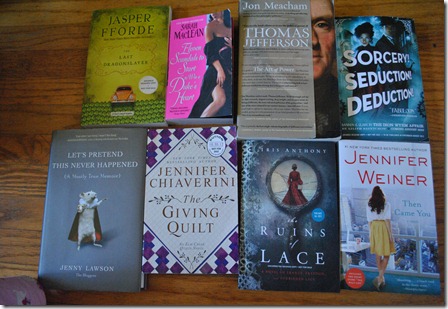 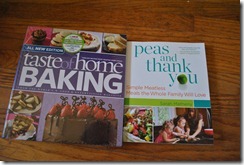 Taste of Home Baking
Peas and Thank You by Sarah Matheny **** (I already own this cookbook and love it. I spilled water on it so I was very excited to pick up a fresh copy. Check out Sarah’s blog: Peas and Thank You. It’s one of my favorites) 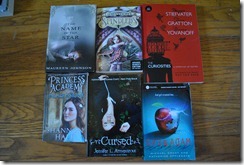 Name of the Star by Maureen Johnson ****
The Spindlers by Lauren Oliver ****
The Curiosities by Maggie Stievfater, Tessa Gratton, Brenna Yovanoff ****
The Princess Academy: Palace of Stone by Shannon Hale
Cursed by Jennifer Armentrout ****
Eve and Adam by Katherine Applegate and Michael Grant 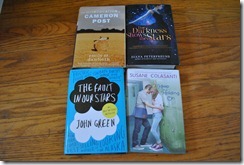 The Miseducation of Cameron Post by Emily M. Danforth ****
For Darkness Shows the Stars by Diana Peterfreund ****
The Fault In Our Stars by John Green ***********
Keep Holding On by Susane Colasanti **** 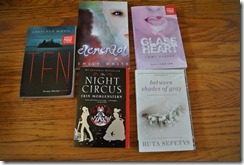 Ten by Gretchen McNeil
Elemental by Emily White
Glass Heart by Amy Garvey
The Night Circus by Erin Morgenstern ****
Between Shades of Grey by Ruta Sepetys ****
Posted by Alison Can Read at 11:14 AM