I've been doing Manga Mondays every week since I started my blog 18 months ago. It's always been a personal feature, but now I'm going to try turning it into a meme. There are quite a few people who do Manga Mondays. I don't claim by any means that I owned or created the idea of Manga Mondays - it's an obvious choice given the alliteration. I think a meme would be a good way for everyone to publicize their own Manga Mondays and get a little more publicity. 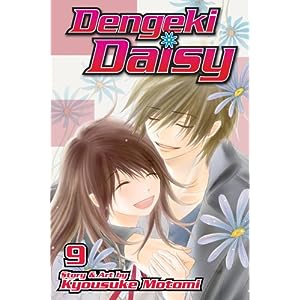 As Teru comes to terms with Kurosaki’s past wrongdoings, Kurosaki searches for the culprit who is trying to resurrect the “Jack Frost” virus he created. But when he learns that Teru might be in danger, will he keep his promise to leave her alone, or will the two be reunited?(courtesy of Amazon)

I forgot to mention in my review of volume 8 that it does not deal solely with Kurosaki's past. There are also several scenes of Kurosaki hunting for the people who have tried to put the Jack Frost virus back into distribution. We get to see the dangerous, tough guy side of Kurosaki.

On that note, we start Volume 9. Kurosaki is still out hunting and Teru is determined to reel him in. She has forgiven him - not that there was all that much to forgive, in my opinion - and wants him back in her life. She comes up with a rather ingenious scheme to get Kurosaki to run back to her.

Teru and Kurosaki are together and all is well. It's wonderful to see all the worries and tension disappear now that the walls between the two have fallen down. Not that everything is perfect. Teru and Kurosaki have to deal with Daisy. Does Daisy still exist now that everyone acknowledges him to be Kurosaki? If so, how will Daisy change?

Plot wise, this volume is a resolution of the series. But there are future volumes. It wasn't until the end of the volume that I realized there was anything left unresolved. I wonder whether Motomi thought that the series was going to end after Volume 9 and then added a few extra plot lines at the end when she got approval to extend the series. It feels that way.

Regardless, there is great humor between Teru and Kurosaki. We see Kurosaki at his best. Teru is also funny in a way of actually being funny, rather than annoying as she has a tendency to be. There are breath-taking, passionate romantic scenes between the two. Few mangakas know how to draw tender moments like Motomi. These pages alone make the series worth reading.

I wonder where Dengeki Daisy will go from here...