The Goddess Test by Aimee Carter

The Goddess Test by Aimee Carter

April 19, 2011; Harlequin
*I received a free copy of this book in exchange for an honest review. 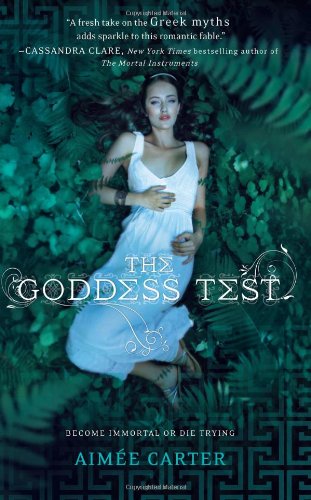 It's always been just Kate and her mom—and her mother is dying. Her last wish? To move back to her childhood home. So Kate's going to start at a new school with no friends, no other family and the fear her mother won't live past the fall.

Then she meets Henry. Dark. Tortured. And mesmerizing. He claims to be Hades, god of the Underworld—and if she accepts his bargain, he'll keep her mother alive while Kate tries to pass seven tests.

Kate is sure he's crazy—until she sees him bring a girl back from the dead. Now saving her mother seems crazily possible. If she succeeds, she'll become Henry's future bride, and a goddess. (courtesy of Goodreads)

The Goddess Test was a surprisingly enjoyable book. I thought it was rather overdone and unrealistic at the beginning, but I kept going. As the pages turned, the story and the characters began to get under my skin and my annoyance turned to affection. By the end of the book, I was very happy to have read it and eagerly anticipating the next installment.

My main problem with the book and the beginning plot was Kate. She is miserable because her dying mother wants to spend her last days in her rural hometown. Kate is devastated that her mother is dying, although mostly in denial, and doesn't like having to establish herself in a new school. But she doesn't outwardly complain. Certainly not. She is incredibly selfless. It's Kate's self-sacrificial nature that I had a problem with. The plot gets going when Kate takes on a huge burden and abandons her mother, almost without thought, to save the life of a person she doesn't even like. This is certainly admirable, but it just didn't ring true to me. Who would really give up that much? Perhaps lots of people would...I'm just not a nice person.

Regardless, the plot moves on and Kate is now stuck in Hades' mansion for the next six months. Not only does she have to stick it out, but she has to pass unnamed tests. With the house comes Henry, aka Hades, who if she passes said tests will become her husband! Kate understandably is skeptical about this young man's claim to be a Greek god, but slowly his explanation is the one that makes the most sense.

This is where the story starts to improve. I loved how mysterious everything was. And coming from someone who hates being in the dark, this is high praise. Neither Kate nor the reader knows what the tests are. Also, Kate supposedly has enemies who don't want her to succeed in her trial period - all the previous candidates died before the tests were complete. We have no idea who these enemies are. People who seem friendly may not be while openly hostile characters may be completely harmless. I liked how our eyes were slowly opened to the truth.

Henry and Kate's relationship gradually builds. Kate starts out feeling hostile towards Henry, for obvious reasons, while he is very cautious about his potential bride. The walls crumble down between them one piece at a time. I never felt like I really cracked the mystery behind Henry, but I was happy with what I saw. They are both kind people who are seeking to do good and be happy. They mesh well.

The book picks up speed toward the end as the veil is opened and we discover Kate's enemies and the results of her test. I was truly surprised by how the story ended and quite pleased.

The Goddess Test is Greek mythology light. You don't have to know or really care anything about mythology to like this book. It was a pleasant read. While I didn't fall in love with the characters, I did grow to respect and like them. Same with the story. Definitely a series that I want to continue reading.