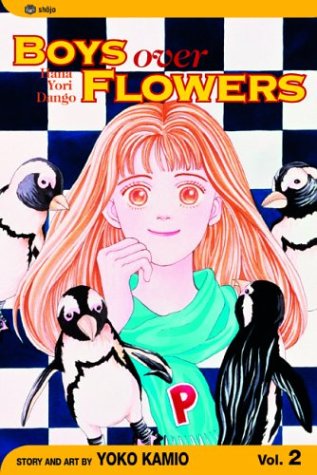 Tsukushi Makino has been accepted into the snobbish Eitoku academy. From a middle-class background and poor compared to her classmates, Tsukushi is determined to get her diploma. Standing in her way is the gang known as F4 -- four handsome but vicious rich boys who rule the school and attack anyone who gets in their way This popular series features drama, romance, humor, strong girls, and cute boys. Because she stood up to the F4 gang, Tsukushi is now a celebrity But not everyone has joined her fan club. A boy playing a violin is rude to her. A trio of girls tricks her at a party. And she gets kidnapped and taken to Tsukasa's mansion, where she and her sometimes enemy have a fight and he spreads cruel gossip about her around the school Tsukushi's resourceful, but how will she handle this one? (courtesy of Goodreads)

In some ways volume 2 of Boys Over Flowers is a mess. It starts off in the middle of a scene without any context. If it's a continuation from volume 1 I've forgotten it. To make matters worse, it feels like there's a dozen separate subplots.


I also didn't like that Tsukushi came off as a crying, weak girl for some of the volume. Granted, she becomes brash and defiant once again when her friend is threatened by the F4 but still. I particularly disliked when she was love sick over Rui's childhood love coming back from France. But when I get sick of one subplot or characterization it changes for the better. The leader of the F4 is a jerk but I still kinda like him. Rui's quasi girlfriend turns out to be super nice and much stronger than Rui. If you can put up with a lot of silliness Boys Over Flowers is great fun. I'm still having a good time.