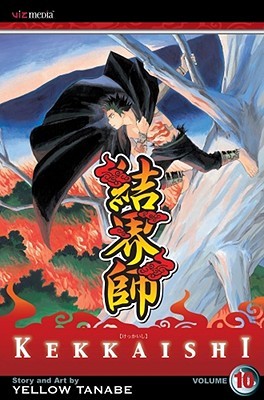 The Kokuboro ayakashi launch a major assault on the Karasumori site to siphon its magical energies to heal their ailing princess. When our friends' mysterious new ally Gen pulls out every last stop to battle them, they make him an offer he can't refuse--join their demon alliance or perish! (courtesy of Goodreads)

Yay for more Kekkaishi! It has been nearly two years since I read the 9th volume of Kekkaishi. Now I've moved (twice) and my library doesn't carry any copies of Kekkaishi nor can I find it at Barnes & Noble. So I was forced to...gasp...buy it.


Volume 10 feels more like Volume 1 for me since it's been so long since I've read the series. I often felt like I was forming opinions about these characters for the first time. Thankfully and surprisingly I remembered most of what had happened in the prior nine volumes. The short synopsis at the beginning of the volume helped too.

I continue to love Yoshimori. I like his fierceness, his talent, and his stubbornness. I like that he seems more like a boy still than a young man. It seems realistic for a kid his age (I think he's 12). Sometimes his "stubbornness" most closely resembles whining. In most contexts that would be irritating, but it brings Yoshimori to life.

The plot is pretty standard. Really important demons come to the site Yoshimori, Tokine, and Gen guard. The kids have to fight them. Added to the excitement is the fact that minor demons attack Yoshimori's house and his grandpa has to fend them off. I love his feisty grandpa who looks frail but can fight with the best still.

There was a big surprise at the end. I'm wondering if they'll reverse course in future volumes but maybe not. At any rate, I can't wait to read more.