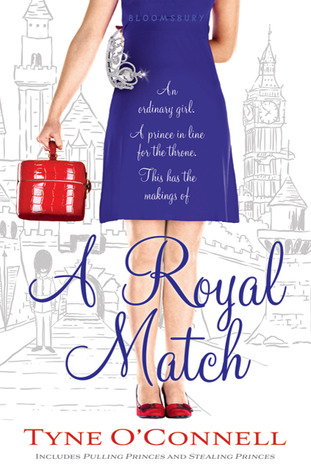 Can a normal American girl really catch a prince?

When LA-born Calypso Kelly arrives at the exclusive all-girls British boarding school, St. Augustine's, she's determined to become popular. But when a photo of Calypso kissing England's heir to the throne, Prince Freddie, ends up in the tabloids, it will take quick thinking to save her reputation-and her relationship with the prince.

After the tabloid disaster, Calypso hopes her next term at St. Augustine's will be better. But nothing could be further from the truth. Her archenemy (and culprit of the tabloid disaster) Honey O'Hare is her new dorm mate and her invite to the Annual Euro Royal Bash is nonexistent. Will a flirtation with a hot new sports star from the boys' school ruin her chances with Prince Freddie? Calypso has some work to do if she wants to go from pumpkin to princess in time for the ball. (courtesy of Goodreads.)

A Royal Match has two - make that three - things that drew me to the story: Boarding School, England, and Royalty. You can leave almost everything else aside and for these qualities alone, I am sure to enjoy the book. And I did.

A Royal Match is actually a compilation of two books out of a four book series (apparently there's a fifth book as well but I can't find any information about it). The two books are Pulling Princes and Stealing Princes.

First thing to know about this book is that it's really a book about boarding school life and friendship. The romance with the British prince is only a very small part of the book and unfortunately isn't that interesting at all.

Calypso is in some ways not likable. She wants to be popular, which is understandable at that age and feels inferior as a regular (make that only mildly rich) American girl amongst a school of filthy rich British girls. Until the book begins, her only friend is an unpopular, rebel daughter of a British rock star. Calypso sets out to change that by pretending to have a boyfriend. Thankfully this wasn't a case where the newly popular girl ditches her old friends. Becoming popular turns out to be easy. The rest of the story is a series of mini-dramas and shallow popular kid in-fighting. Which is neither bad nor good.

What bothered me about Calypso was her crush on Freddie, the Prince. They had a shared love of fencing and flirted via text, but other than that she didn't know him. And she didn't attempt to get to know him. All she ever went on about was her excitement of being liked by a Prince. I would respect her much more if she fell for a boy who just happened to be a Prince. But his status seemed to factor greatly into her feelings for him. I also would have preferred to have a plot more centered on the romance element, but since it was handled so poorly, I'm glad the book stuck mostly to boarding school.

I loved being immersed into boarding school life and upper class British culture. The book contains a glossary at the end of British slang terms. Arrogantly, I thought I wouldn't need it since I know a decent amount of British slang, but it came in very handy for certain words. The girls and boys boarding schools are made up but are obviously meant to be Eton and a girls school nearby. I felt like the descriptions of boarding school culture was quite accurate. The author went to boarding school as did her children. She's the poshest of the posh, so she has first hand knowledge of the lifestyles of the rich and British.

A Royal Match is a fun book. Don't try to get anything more out of it. Most of the characters - even the likable ones - are shallow, elitist, immature little girls. And that's okay with me, because I read the book to be transported into a world that I've never and will probably never experience. That's exactly what I got.